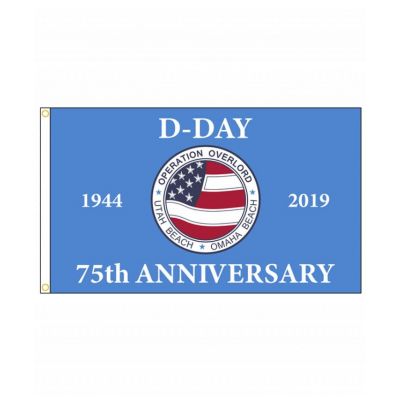 This 3 ft. x 5 ft. D-Day flag is printed of 100% nylon, hand-sewn with two rows of stitching on top and bottom, four rows stitching on the fly end, finished with canvas header and brass grommets.

June 6th, 2019 is the 75th anniversary of Operation Overlord, as was D- Day's official code name for the Battle of Normandy, that took place on the northern coast of France, near the town of Colleville-sur-Mer and now is the location for the Omaha Beach American Cemetery & Memorial.

Over 155,000 Allied troops participated along with 4,000 ships and over 11,000 planes launched the most successful invasion of German-occupied Western Europe during World War II making it the largest amphibious invasion in history.

Be part of History with this Anniversary flag. A great gift idea for any World War II service members or members of their family or fly it to mark that day in history.