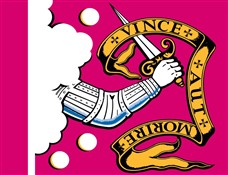 Today as we celebrate Patriots’ Day, we fly the Bedford Flag, a symbol of the start to the American Revolution. Patriots’ Day, a holiday celebrated each year on the third Monday of April, commemorates the battles of Lexington and Concord in 1775.

These battles were the first of The Revolutionary War, where American colonists fought and won their freedom from British rule. According to legend, Nathanial Page, cornet of the Massachusetts Minutemen, carried the Bedford Flag into battle of Concord on April 1775. That very same flag was preserved and can still be seen in the Bedford Free Public Library.