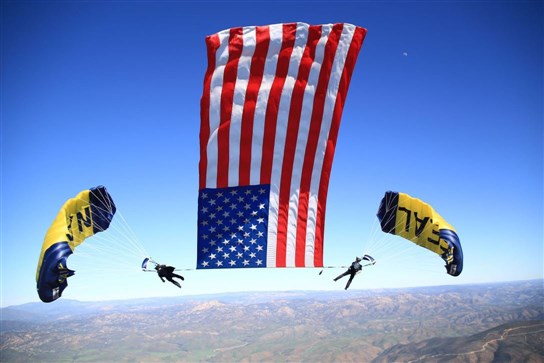 The birth of the American flag according to legend was in 1776, when General George Washington commissioned Betsy Ross, a Philadelphia seamstress, to create a flag for the new nation in anticipation of a declaration of its independence. On June 14, 1777, the Continental Congress passed a resolution adopting the first flag of the United States when John Adams stated, "Resolved, that the flag of the thirteen United States shall be thirteen stripes, alternate red and white; that the Union be thirteen stars, white on a blue field, representing a new constellation." The former Grand Union flag which featured the Britain Union flag in the canton (inner corner) was replaced with the new design featuring five point stars for each state in the union. Since the U.S. flag’s conception, there have been twenty-seven official versions, with the current version dating back to July 4, 1960, when Hawaii became the 50th state.

The national observance of Flag Day came years later on June 14, 1916, when President Woodrow Wilson issued a proclamation calling for a nationwide observance of the event. However, Flag Day did not become official until 1949 when President Harry Truman signed the legislation into law, proclaiming June 14 as National Flag Day. Flag Day is not an official federal holiday, however a nationwide observance. People honor this day by displaying the U.S. flag at homes and public buildings, with singing of the National Anthem, reciting of the Pledge of Allegiance and Presidential Proclamation, and with flag raising ceremonies. Other celebrations include street parades, awards for special recognition's, school quizzes and essay competitions. The American flag has carried many nicknames over the years, such as “Old Glory” or “Star-Spangled Banner,” but what hasn’t changed is what the flag represents, “One nation under God, with liberty and justice for all.”