Home/US Flag Supply Blog/A Flag on the Moon: We Came in Peace for All Mankind

A Flag on the Moon: We Came in Peace for All Mankind 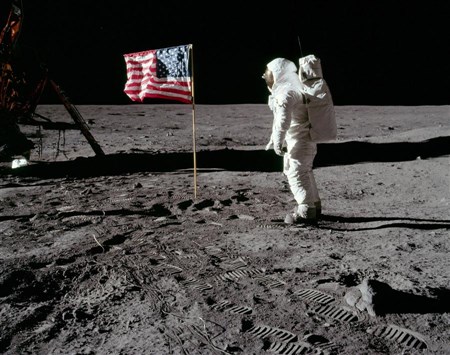 The 1960’s are remembered for many things; John F. Kennedy became the 35th president of the United States and a few years later was assigned, The Beatles released their first single, Martin Luther King Jr. gave his famous "I Have a Dream" speech, Woodstock Music & Art Fair, the Vietnam war, the fight for civil rights, radical protests, and an arms race to the moon against the Soviet Union. However, most who were alive during that time remember one thing specifically, exactly where they were when they heard or saw American astronaut Neil Armstrong, 240,000 miles from Earth, speaking these words to more than a billion people listening at home: “That’s one small step for man, one giant leap for mankind.” Stepping off the lunar landing module Eagle, Armstrong planted his left foot on the gray, powdery surface becoming the first human to walk on the moon.

The impossible task of putting a man on the moon was put into notion in the early part of the decade after President Kennedy made a mandate to put a man on the moon before the Soviets and the decade end. In a speech former President Kennedy stated: “I believe this nation should commit itself to achieving the goal, before this decade is out, of landing a man on the moon and returning him safely to Earth.” At the time of this speech, the United States was trailing the Soviet Union in space developments. In 1966, five years after President Kennedy’s mandate, the National Aeronautics and Space Administration (NASA) launched the first unmanned Apollo mission. Then in 1967 tragedy struck the Kennedy Space Center in Cape Canaveral Florida after a fire broke out during a manned launch pad test, killing three astronauts.

In the face of many setbacks, NASA along with thousands of employees including a team of international scientist and engineers, forged ahead in their quest at an alarming rate. Hard pressed to see this mandate completed before the decade’s end, they worked nonstop to reach success in 1968 with the first manned Apollo mission. Apollo 7 orbited Earth and successfully tested the sophisticated computer systems that were created to conduct a safe and achievable moon mission and landing. Two months later three astronauts on Apollo 8 journeyed to the dark side of the moon and back and in March the following year, the Apollo 9 mission were able to test the lunar module in Earth’s orbit that would later be used by Neil Armstrong’s Apollo 11 team. Then another milestone was reached when Apollo 10 took the first complete Apollo spacecraft around the moon on a test run before the scheduled Moon landing mission.

With the world watching on July 16th, 1969, the Apollo 11 crew launched with astronauts Neil Armstrong, Michael Collins, and Edwin Aldrin abroad. Seventy six hours after launch, Apollo 11 entered into lunar orbit. The next day, the lunar module Eagle began its decent to the lunar surface and on July 20th, 1969 the world of possibilities was changed when the Apollo 11 crew accomplished the seemingly impossible feat and became the first manned lunar landing mission to place humans on the surface of the moon. Six hours after landing on what is called the Sea of Tranquility; Neil Armstrong took the first footsteps on the surface of a world beyond Earth. This iconic milestone for mankind is marked with the planting of a U.S. flag on the moon’s surface, which still remains today while also leaving behind a patch honoring the fallen Apollo 1 crew and a plaque of one Eagle’s legs. It profoundly reads: “Here men from the planet Earth first set foot on the moon–July 1969 A.D–We came in peace for all mankind.”

In all of American history, the U.S. flag has been a symbol of perseverance. It is no surprise that we planted a U.S. flag on the moon, after all our country has proudly displayed and raised our great flag in the most trying times of conflict, challenge, and adversity. Our nation has always endured as a country as we have raised American flags abroad, staked our claim to this great nation with the old glory flag, and to accomplish the unbelievable and impossible task of landing on the moon…there would be no other way to represent this great milestone for mankind. 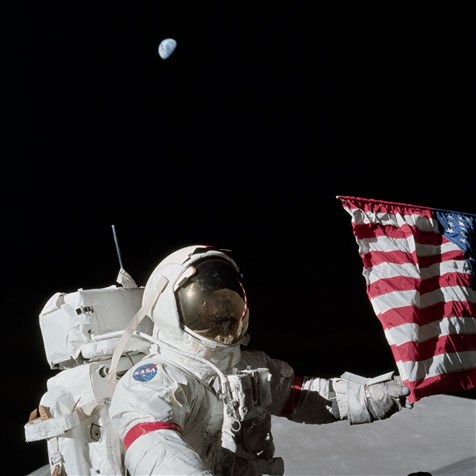